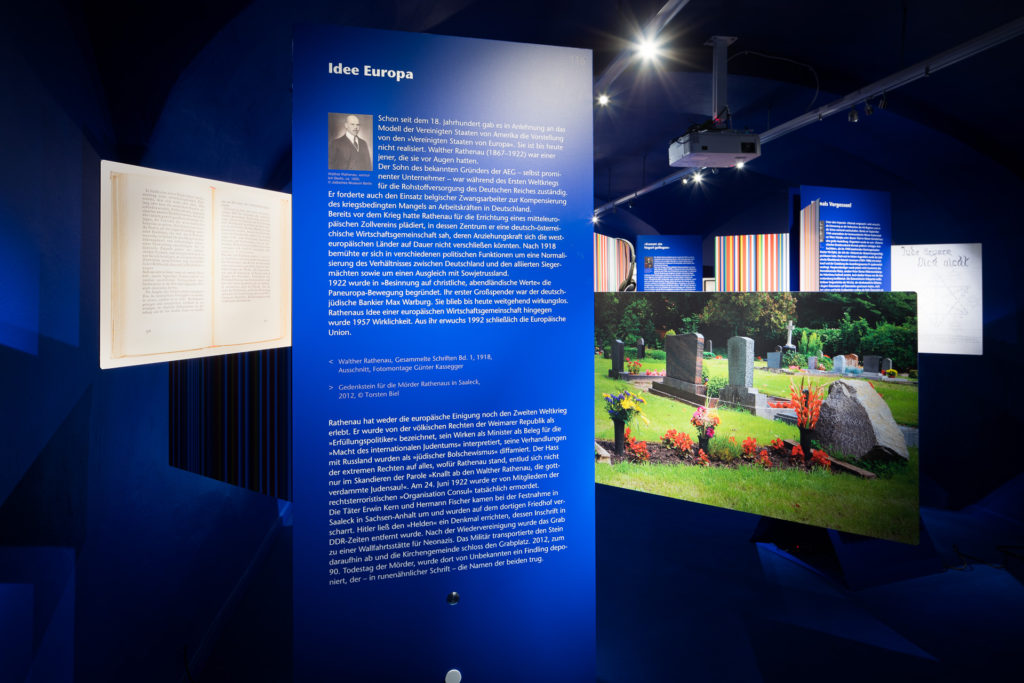 Installation “The Idea of Europe”

The concept of the “United States of Europe” has been around already since the 18th century, based on the model of the United States of America. So far, it has not materialized. Walther Rathenau (1867–1922) was among those who pursued this idea.

The son of the well-known founder of AEG—himself a prominent entrepreneur—was responsible for the supply of raw material for the German Reich during World War I. He also demanded the use of Belgian forced laborers to offset the lack of manpower in Germany caused by the war.

Already before the war, Rathenau had made the case for the establishment of a Central European customs union with a German-Austrian economic community at its center; he envisaged that in the long run its appeal would be irresistible to Western European countries. After 1918, he pursued in various political functions the normalization of the relationship between Germany and the allied victorious powers as well as a settlement with Soviet Russia. In 1922, the Pan-European Movement was founded based on the “return to Christian, Western values.” Its first major donor was German-Jewish banker Max Warburg. To the present day, however, it has remained largely ineffective. By contrast, Rathenau’s idea of a European Economic Community became reality in 1957, which eventually evolved into the European Union in 1992.

Rathenau did not live to witness Europe’s unification or World War II. He was labeled as “compliance politician” by the ethno-centric right of the Weimar Republic, his actions as foreign minister were construed as evidence of the “power of international Jewry,” his negotiations with Russia vilified as “Jewish Bolshevism.” The extreme right’s hatred of anything Rathenau represented was vented not only by chanting the slogan “Gun down this Walter Rathenau, the godforsaken Jewish sow!” In fact, on June 24, 1922, he was assassinated by members of the right-wing extremist terrorist “Organization Consul.”

The perpetrators Erwin Kern and Hermann Fischer perished in the course of their arrest in Saaleck in Saxony-Anhalt and were hastily buried at the local cemetery. Hitler had a monument erected for these “heroes” with an inscription that was removed in GDR times. Following German reunification, the tomb became a pilgrimage site for neo-Nazis. As a result, the army removed the stone and the local parish abolished the burial plot. In 2012, on the 90th anniversary of the assassins’ death, a boulder was placed here by unknown individuals featuring—in runelike script— the name of these two men.

Michael Miller (Vienna) about Antisemitic accusations after WW 1 and the Paneuropean-Movement: