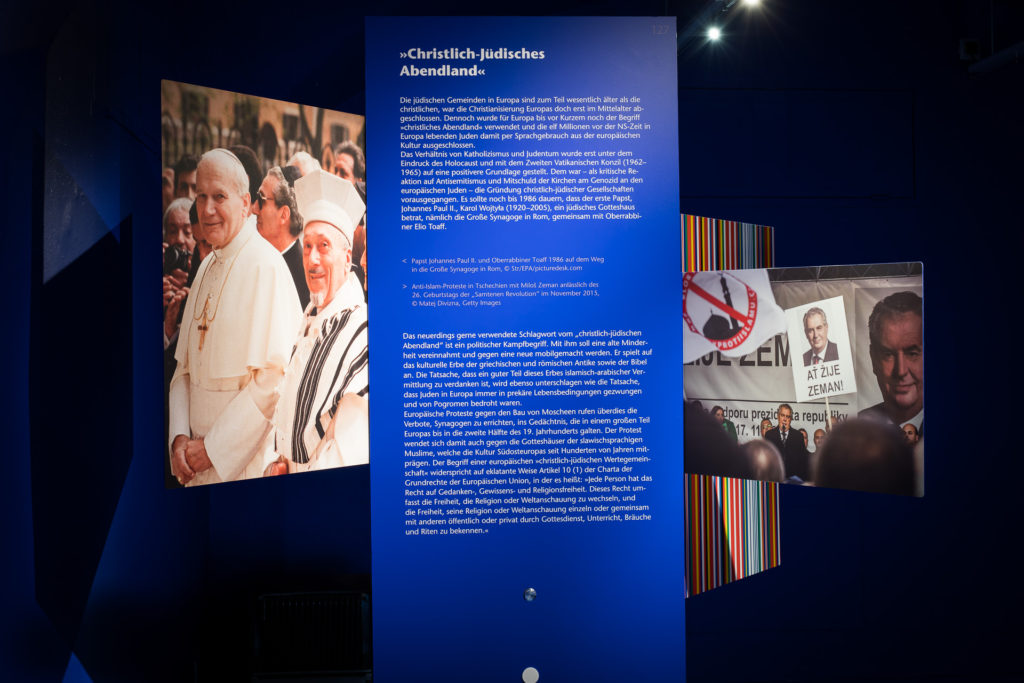 The Jewish communities in Europe are in part significantly older than the Christian communities; after all, Europe’s Christianization was completed only in the Middle Ages. Nonetheless, until recently, the term “Christian Occident” was applied to Europe; hereby, eleven million Jews who had lived here prior to the National Socialist period were erased from European culture via linguistic usage. The relationship between Catholicism and Judaism was put on a more positive footing only under the impact of the Holocaust and with the Second Vatican Council (1962–1965). This had been preceded by the establishment of Christian-Jewish associations—as a critical reaction to the anti-Semitism and complicity of the churches in the genocide of the European Jews. It would take until 1986 until the first pope, John Paul II, Karol Wojtyła (1920-2005), would enter a Jewish house of prayer, namely, the Great Synagogue of Rome together with Chief Rabbi Elio Toaff.

< Pope John Paul II and Chief Rabbi Toaff on their way to the Great Synagogue of Rome in 1986, © Str/EPA/picturedesk.com

> Anti-Islam protests in the Czech Republic with Miloš Zeman on the occasion of the 26th anniversary of the “Velvet Revolution” in November 2015, © Matej Divizna, Getty Images

The catchword “Judeo-Christian West,” which has recently become popular, is a political battle cry. With its help, an old minority is meant to be coopted and mobilized against a new minority. It alludes to the cultural heritage of Greek and Roman antiquity as well as to the Bible. The fact that a significant part of this heritage is owed to Arabo-Islamic mediation is withheld as is the fact that Jews have always been forced into precarious life conditions and threatened by pogroms. Moreover, European protests against the construction of mosques recall prohibitions to build synagogues, which had been in force in large parts of Europe until well into the second half of the 19th century. Thus, the protests are also directed at the houses of worship of Muslims who speak Slavic languages and are shaping the culture of Southeastern Europe since hundreds of years. The concept of a European “Judeo-Christian community of shared values” blatantly contravenes Article 10 (1) of the Charter of Fundamental Rights of the European Union that declares: “Everyone has the right to freedom of thought, conscience and religion. This right includes freedom to change religion or belief and freedom, either alone or in community with others and in public or in private, to manifest religion or belief, in worship, teaching, practice and observance.”