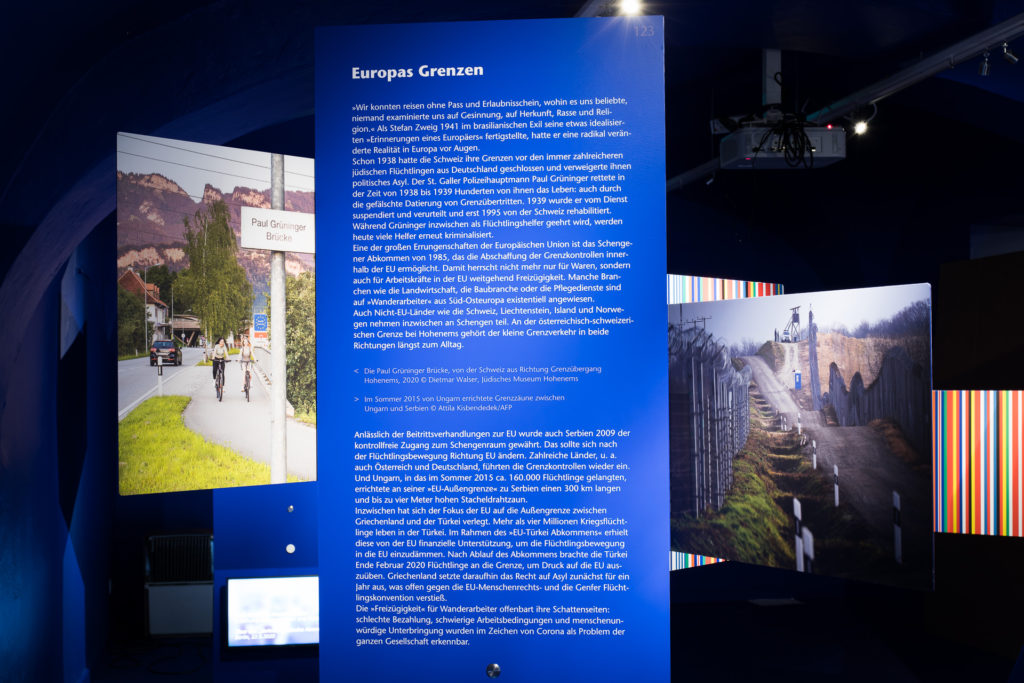 “We were able to travel without passport and permit, wherever we desired, nobody inspected our views, origins, race, and religion.” By the time Stefan Zweig completed his—albeit slightly idealized— Memories of a European in his Brazilian exile in 1941, he was faced with a radically altered reality in Europe. As early as in 1938, Switzerland had closed its borders to the rising numbers of Jewish refugees from Germany and refused them political asylum. In the period from 1938 until 1939, the St. Gallen police commander Paul Grüninger saved the lives of hundreds of Jewish refugees, also by forging the dates of border crossings. In early 1939, he was suspended from office and sentenced. Only in 1995, he was rehabilitated by Switzerland. While Grüninger is being honored as someone who came to the rescue of refugees, many helpers today are once again criminalized. One of the great achievements of the European Union was the Schengen Agreement of 1985, which enables the abolishment of border controls within the EU. In the meantime, also non-EU countries such as Switzerland, Liechtenstein, Iceland, and Norway participate in the Agreement. At the Austrian-Swiss border near Hohenems, the local border traffic in both directions has long since become part of everyday life. Some sectors such as agriculture, construction, or nursing are heavily reliant on “migrant workers” from Southeastern Europe. For them, special arrangements, independent of EU membership, have been put in place.

> Border fences between Hungary and Serbia, erected by Hungary in the summer of 2015 © Attila Kisbendedek/AFP

In 2009, on the occasion of the accession negotiations with the EU, the Republic of Serbia, too, was granted access to the control-free Schengen Area. This was to change in the wake of refugees moving in the direction of the EU. Numerous countries, among them also Austria and Germany, have reintroduced border checks.  And since in the summer of 2015 about 160,000 refugees had reached Hungary, it erected a 300-km long and up to four-meter high barbed wire fence along its “external EU border.” In the meantime, the EU’s focus has shifted to the external border between Greece and Turkey. More than four million war refugees live in Turkey. In the framework of the EU-Turkey Agreement, the country has received financial support from the EU to stem the refugee flow toward the EU. Following the expiration of this agreement, Turkey brought refugees to the border in late February 2020 to put pressure on the EU. At that, Greece suspended, initially for one year, the right to asylum, which was openly in violation of the EU Human Rights Convention and the Geneva Refugee Convention. Then again, in the course of Corona, “migratory labor” in Europe is revealing its flaws: low pay, tough working conditions, and inhumane accommodations have unexpectedly been recognized as a problem for all of society.