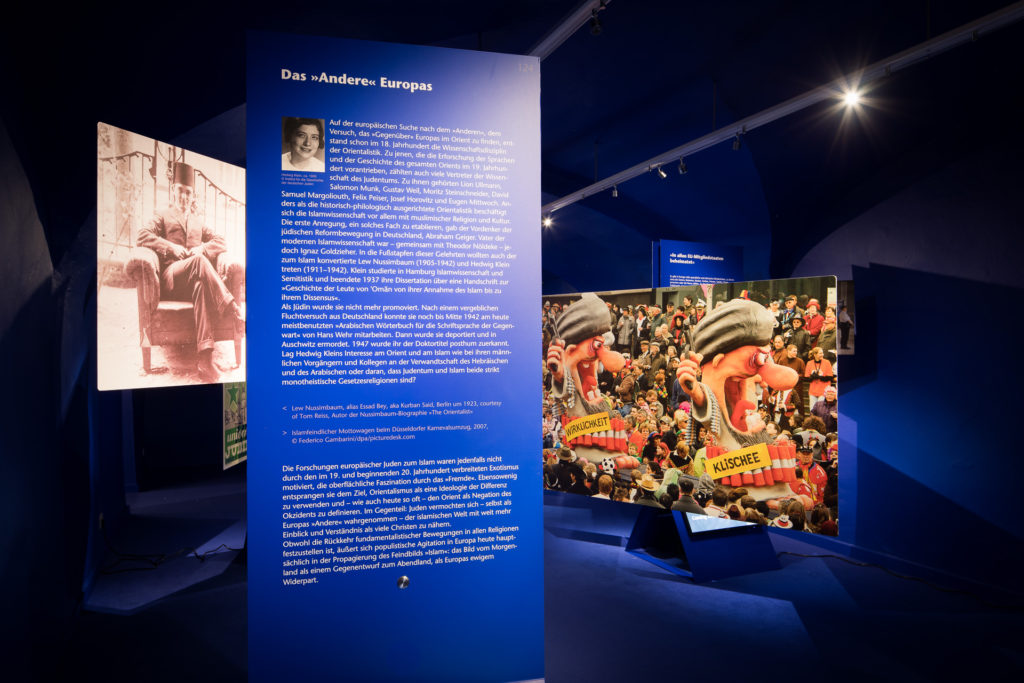 In the European search for the “other,” the attempt to find Europe’s “counterpart” in the Orient, the academic discipline of Oriental Studies came into being already in the 18th century. Among those driving forward linguistic and historical research of the entire Orient in the 19th century were also many representatives of the Wissenschaft des Judentums (Science of Judaism) , such as Lion Ullmann, Salomon Munk, Gustav Weil, Moritz Steinschneider, David Samuel Margoliouth, Felix Peiser, Josef Horovitz, and Eugen Mittwoch. Unlike the history- and philology-oriented Oriental Studies, Islamic Studies mainly dealt with Muslim religion and culture.  The initial impulse to establish such field of study came from the pioneer of the Jewish reform movement in Germany, Abraham Geiger. However, the father of modern Islamic studies was—together with Theodor Nöldeke—Ignaz Goldzieher. Lew Nussimbaum (1905-1942) who converted to Islam and Hedwig Klein (1911-1942) also wanted to follow in the footsteps of these scholars. Klein studied Islamic and Semitic studies in Hamburg and completed her doctoral thesis in 1937 on a manuscript about the “History of the people of ‘Omān from their adoption of Islam until their dissensus”. Since she was Jewish, her PhD was not approved. After a failed attempt to escape Germany, she was still able to collaborate until mid-1942 on today’s most widely used Dictionary of Modern Written Arabic by Hans Wehr. Eventually she was deported and murdered in Auschwitz. In 1947, she was posthumously awarded her PhD degree. Was Hedwig Klein’s interest in the Orient and in Islam founded, like that of her male predecessors and colleagues, in the affinity between Hebrew and Arabic or else in the fact that both Judaism and Islam are considered to be law based monotheistic religions?

^ Hedwig Klein, ca. 1930, © Institut für die Geschichte der deutschen Juden, Hamburg
< Den Orient im Herzen: Lew Abramowitsch Nussimbaum alias Essad Bey alias Kurban Said, Berlin 1921
> Anti-Islamic float at the Düsseldorf carnival parade, 2007, © Federico Gambarini/dpa/picturedesk.com
In any case, research carried out by European Jews on Islam was not motivated by the exoticism widespread in the 19th and early 20th century, by the superficial fascination with the “alien.” Nor was it prompted by the goal to use Orientalism as an ideology of difference and—as so often happens these days as well— to define the Orient as the negation of the Occident. On the contrary: Jews—themselves perceived as Europe’s “other”—were able to approach the Islamic world with much more insight and understanding than many Christians. Although the return to fundamentalism can be observed in all religions, these days, populist agitation expresses itself mainly in the promotion of the enemy stereotype of “Islam”: the image of the Orient as a counterdraft to the Occident, as Europe’s eternal adversary.

Brian Klug (London) about the inner and outer “other”  of Europe and the heritage of Colonialism: