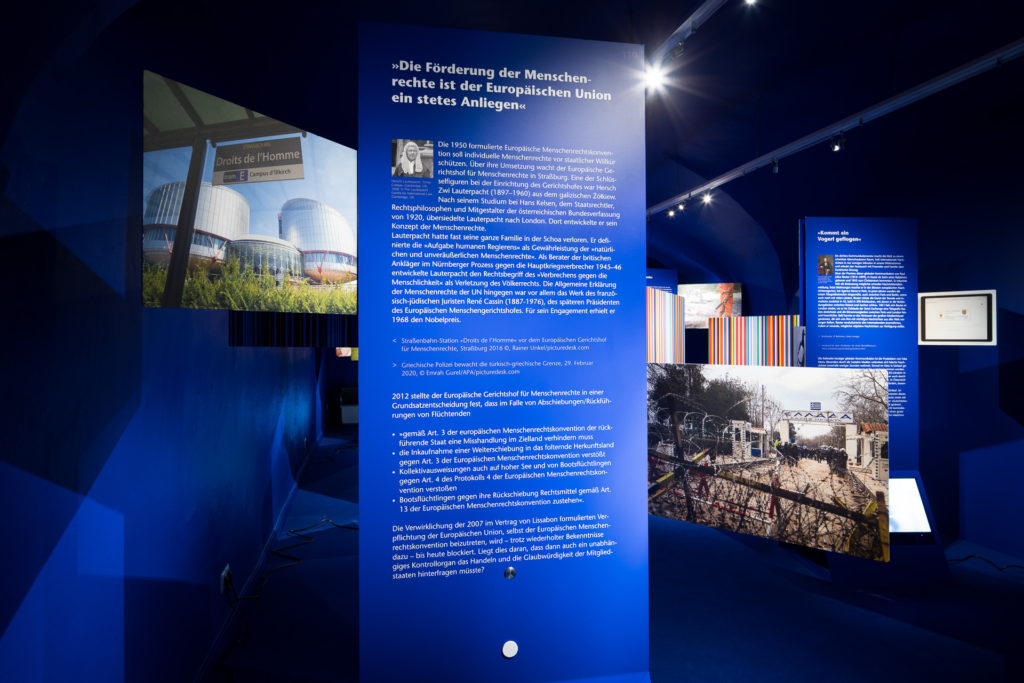 The European Human Rights Convention formulated in 1950 aims to safeguard the protection of individual human rights against state arbitrariness. The European Court of Human Rights in Strasbourg watches over its implementation. One of the pivotal figures in the establishment of the European Court of Human Rights was Hersch Zvi Lauterpacht (1897–1960) from Żółkiew in at the time Austro-Hungarian Galicia. After his studies in Vienna under Hans Kelsen, the expert in constitutional law, legal philosopher, and co-creator of the 1920 Constitution of Austria, Lauterpacht moved to London. Here he developed his concept of human rights. Possibly, its humanitarian character is linked to his personal experience: Lauterpacht had lost almost his entire family in the Shoah. He defined the “issue of human government” as securing the “natural and inalienable rights of man.”  As adviser to the British prosecutors at the Nuremberg trials against the major criminals of war in1945-46, Lauterpacht developed the legal concept of “crimes against humanity” as elements of offense against international law. ^ Hersch Lauterpacht, Trinity College, Cambridge, UK, 1958, © The Lauterpacht Centre for International Law, Cambridge, UK < Tramway station “Droits de l’Homme” in front of the  European Court of Human Rights, Strasbourg 2016 ©, Rainer Unkel/picturedesk.com > Greek police guarding the Turkish-Greek border, February 29, 2020, © Emrah Gurel/APA/picturedesk.com In 2012, the European Court of Human Rights decided in a landmark judgement that in case of expulsion/refoulement of refugees

Implementation of the European Union’s commitment as formulated in the 2007 Treaty of Lisbon to accede to the Human Rights Convention has been blocked to this day—repeated avowals to do so notwithstanding. Could it be that then also an independent monitoring body would have to scrutinize the actions and credibility of the member states?