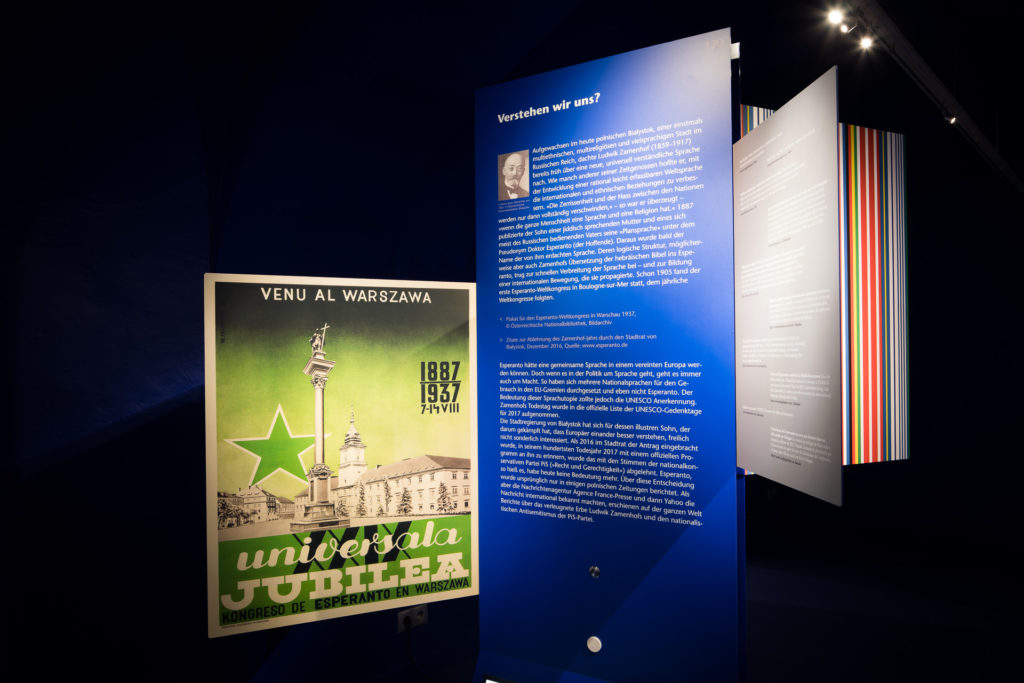 Installation Do We Understand Each Other? Photo: Dietmar Walser

Having grown up in Białystok, now Poland, a formerly multiethnic, multireligious, and polyglot city in the Russian Empire, Ludwik Zamenhof (1859–1917) began already early on to think about a new, universally understandable language. Like some of his contemporaries, he hoped to improve international and ethnic relations through the development of a easily graspable universal language. He was convinced that “division and hate among the nations will completely disappear only when all of humanity will have one language and one religion.” In 1887, the son of a Yiddish-speaking mother and a usually Russian-speaking father published his “planned language” under the pseudonym Doktoro Esperanto (the hopeful). This would soon become the name of the invented language. Its logical structure and possibly also Zamenhof’s translation of the Hebrew Bible into Esperanto contributed to the fast dissemination of the language—and to the formation of an international movement propagating it. Already in 1905, the first World Esperanto Congress took place in Boulogne-sur-Mer, which was followed by annual conventions around the world.

> Quotes regarding the rejection of the Zamenhof-year by the Białystok municipal council, December 2016, © mounted by Günter Kassegger,  source: www.esperanto.de

Esperanto had the potential of becoming a common language in a united Europe. Yet, politics and language is always also a matter of power. Hence, several national languages have prevailed for use in EU bodies and not Esperanto. However, UNESCO has paid tribute to the significance of this linguistic utopia. Zamenhof’s death anniversary was included in the official list of UNESCO commemoration days for 2017. Then again, the Białystok municipal government failed to display any particular interest in the city’s illustrious son who had worked to enable Europeans to better understand each other. When in 2016, a motion was made in the municipal council to commemorate him with an official program on the occasion of the hundredth anniversary of his passing in 2017, it was rejected with the votes of the national-conservative PiS (“Law and Justice”) party. Esperanto, it was argued, had no longer any significance today. This decision was originally reported only in several Polish newspapers. However, when this was brought to international attention by the newsagency Agence France-Presse and then by Yahoo, reports about Ludwik Zamenhof’s repudiated heritage and the PiS party’s nationalist anti-Semitism were published all over the world.

Liliana Feierstein (Berlin): About Esperanto as a Jewish, European, and International language