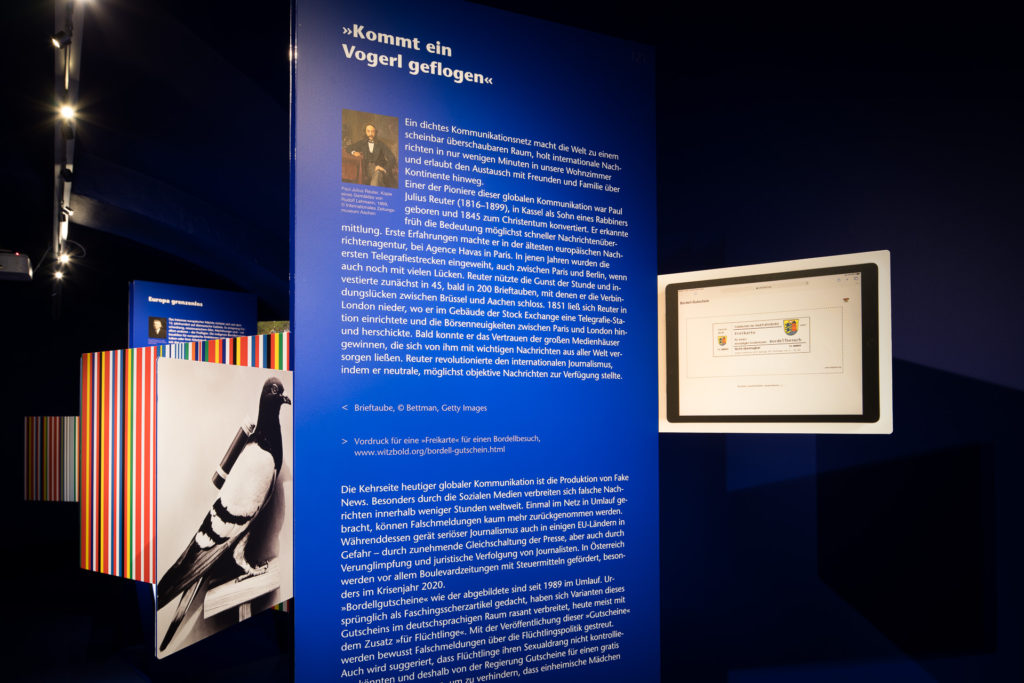 A dense communications network transforms the world into a seemingly manageable space, delivers within minutes international news to our living rooms, and enables friends and family across continents to stay in contact. One of the pioneers of global communication was Paul Julius Reuter (1816–1899) who was born in Kassel as son of a rabbi and converted to Christianity in 1845. Early on, he recognized the significance of a rapid news transfer. He gained his first experience at the oldest European news agency, Agence Havas in Paris. In those years, the first telegraph lines were inaugurated, also between Paris and Berlin, though still with many gaps. Reuter seized the moment and invested in initially 45 and soon after in 200 carrier pigeons, hereby closing the missing links between Brussels and Aachen. In 1851, Reuter settled in London. He established a telegraph station in the stock exchange building from where he transmitted stock market news back and forth between Paris and London. Soon he was able to gain the trust of large media houses that tasked him with supplying them with important news from around the world. Reuter revolutionized international journalism by providing neutral and as far as possible objective news.

< Carrier pigeon, © Bettman, Getty Images > Pre-printed form of a free ticket for a brothel visit, © https://www.witzbold.org/bordell-gutschein.html The flipside of today’s global communications is the generation of fake news. Particularly via social media, bogus news is disseminated around the world in no time. Once online, it is almost impossible to revoke fake news brought into circulation. Meanwhile, serious journalism is in jeopardy also in several EU countries—due to the increasing enforced conformity of the press, but also the vilification and legal prosecution of journalists. In Austria, tabloid newspapers in particular receive funding from tax money, especially in the crisis year 2020. “Brothel vouchers” such as the one shown here have been in circulation since 1989. Originally conceived as a joke article for carnivals, versions of this voucher have swiftly spread around German-speaking Europe, nowadays mostly with the added remark “for refugees.” By publishing these “vouchers,” fake news about refugees is deliberately disseminated. Moreover, it is suggested that refugees are unable to control their sex drive and, therefore, receive vouchers for a free brothel visit from the government to prevent the rape of native girls.

Andrea Petö (Vienna) about closing the Central European University by the Orban governement: