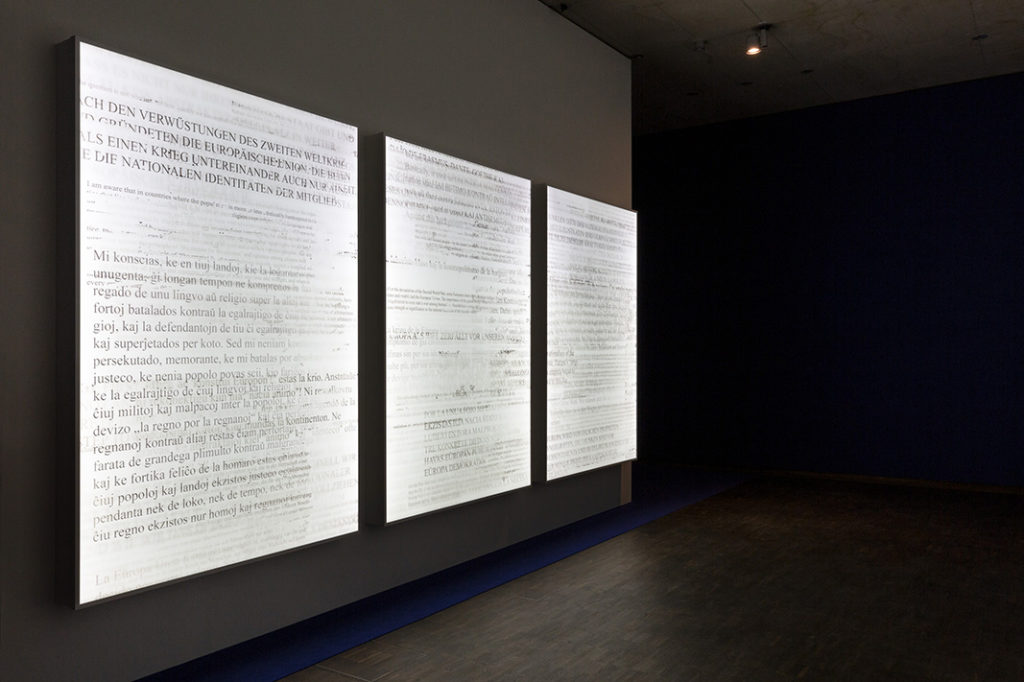 Daniel Cohn-Bendit
We are still in a phase of overcoming the nation state. Basically, it took us five hundred years to conquer the nation state and the cultural identities that emerged with it, with all their contradictions—revolutions, terrible historical moments—and to transform them into something new. Against this background Europe is a unique project.The question is not whether, but how quickly we accomplish the necessary transfer of national sovereignty to the European level. And how we shape this democratically.For the first time many people are realizing that there is not only their nation state and that the EU is not an abstract playground in the far distance. People are realizing that Europe has a very concrete impact on our everyday life. For the first time we have a European public. This is a decisive step towards a European democracy.

Jacques Derrida / Jürgen Habermas
Today we know that many political traditions, which in the semblance of their naturalness demand authority, have been “invented.” In contrast, a European identity born in the light of the public would have from the beginning a feeling of something constructed. But only something constructed arbitrarily would bear the stigma of arbitrariness. The political-ethical will, which is expressed in the hermeneutics of self-understanding processes, is not arbitrariness. The distinction between the heritage we take on and the one we want to reject requires as much circumspection as the decision on the reading in which we appropriate it. Historical experiences are candidates only for a conscious appropriation, without which they do not acquire an identity-forming force.

Today’s Europe is scarred by the experiences of the totalitarian regimes of the twentieth century and by the Holocaust—the persecution and extermination of European Jews, in which the Nazi regime also implicated the societies of the conquered countries. The self-critical debates about this past have brought to mind the moral foundation of politics. A heightened sensitivity to violations of personal and bodily integrity is reflected, among other things, in the fact that the council of Europe and the EU have made renunciation of the death penalty a condition of membership.

I call patriotism or service to the fatherland only service to the welfare of all my compatriots, regardless of their origin, language or religion. I must never call patriotism the service to particularly the non-Jewish interests, language or religion of that population which constitutes the majority in the country. In accordance with the principle that citizens—even if they constitute a larger majority in the country—have no moral right to impose their language or religion on other citizens, I must advocate that in my country every people has the right to establish schools and other institutions for their members with their language and their religion if they so desire, but that in all public institutions, which are not exclusively for one people, only a neutral human language and neutral human or state stability should prevail. As long as this is not possible, I must work to ensure that there are schools and other institutions in my country with a neutral human language for those subjects who do not want or cannot use institutions with this or that vernacular; and from all mutual struggles of tongues or religions for supremacy I must abstain, for it is only a struggle between one wrong and another.

I am aware that in countries where the population is more or less ethnically homogenous the injustice that lies in the domination of one language or religion over others will not be understood for a long time, and the population will fight with all means against equal rights for all languages and religions and will persecute and sling mud at those who advocate equal rights. But I will never let myself be confused by this persecution and remember that I am fighting for absolute truth and justice, that no people can know what will happen to them tomorrow, that equal rights for all languages and religions will eliminate the cause of all wars and conflicts between peoples, that any action against the principle of “the empire for the citizens” and violence among citizens will always remain violence, even if committed by an overwhelming majority against a marginal minority, and that lasting happiness for mankind is only possible on the condition of equal and absolute justice for all people and countries, regardless of place and time and strength, and when in every empire there will be only human beings, only citizens regardless of their ethnicity.

I call my nation the totality of all people who live in my homeland, regardless of their origin, language or religion. But to my nationality I must always add the words “human being” to show that I do not count myself among my nation in a chauvinistic sense. The multitude of all people who have the same origin as me I call my people. I must not call my nation by the name of any people, I have always to call it—at least in conversation with like-minded people—by the neutral geographical name of my empire or country. If my interlocutor wants to know not only which political-geographical, but also which ethnic group I belong to, then I name to him my people, my language, my religion etc. separately. Example: Swiss individual, Petersburg individual, Warsaw individual.

Ágnes Heller
Nationalism’s victory came in 1914—against the internationalism of the working class and the cosmopolitanism of the bourgeoisie. Europe’s “original sin” was the ugly child of nationalism. All previous empires began to break up into nation states. This trend is being continued to this day.

After the devastation of the Second World War, some European states drew the consequences from the dark side of being nation states and established the European Union. The importance of this grand design should not be downplayed. Member states are obliged never to even start a war among themselves. Nonetheless, a sense of European identity has not, to this day, gained the same strength or significance as the national identities of the member states.

The European Union was founded on the decision to uphold certain values. However, even among those values chosen there are contradictions. First and foremost, because the Union is a union of nation states. As a Union, the value of solidarity must prevail; as a Union of nation states, on the other hand, it has to respect national interests due to a nation’s values, so nationalism will usually be stronger than solidarity.

“Libération” / Bernard-Henri Lévy
“Enough of ‘building Europe’!” is the cry. Let’s reconnect instead with our “national soul”! Let’s rediscover our “lost identity”! This is the agenda shared by the populist forces washing over the continent. Never mind that abstractions such as “soul” and “identity” often exist only in the imagination of demagogues.

Europe is being attacked by false prophets who are drunk on resentment, and delirious at their opportunity to seize the limelight.

Europe as an idea is falling apart before our eyes.

For those who still believe in the legacy of Erasmus, Dante, Goethe and Comenius there will be only ignominious defeat. A politics of disdain for intelligence and culture will have triumphed. There will be explosions of xenophobia and antisemitism. Disaster will have befallen us.

Our faith is in the great idea that we inherited, which we believe to have been the one force powerful enough to lift Europe’s peoples above themselves and their warring past. We believe it remains the one force today virtuous enough to ward off the new signs of totalitarianism that drag in their wake the old miseries of the dark ages. What is at stake forbids us from giving up. Our generation got it wrong. Like Garibaldi’s followers in the 19th century, who repeated, like a mantra, “Italia se farà da sè” (Italy will make herself by herself), we believed that the continent would come together on its own, without our needing to fight for it, or to work for it. This, we told ourselves, was “the direction of history”. We must make a clean break with that old conviction. We don’t have a choice. We must now fight for the idea of Europe or see it perish beneath the waves of populism. 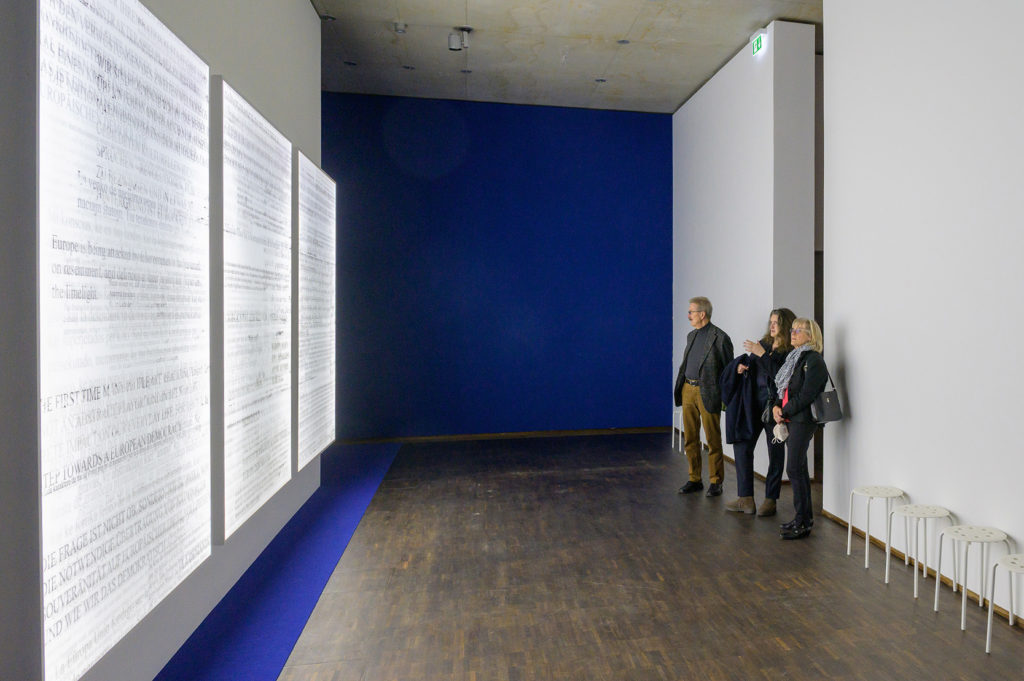