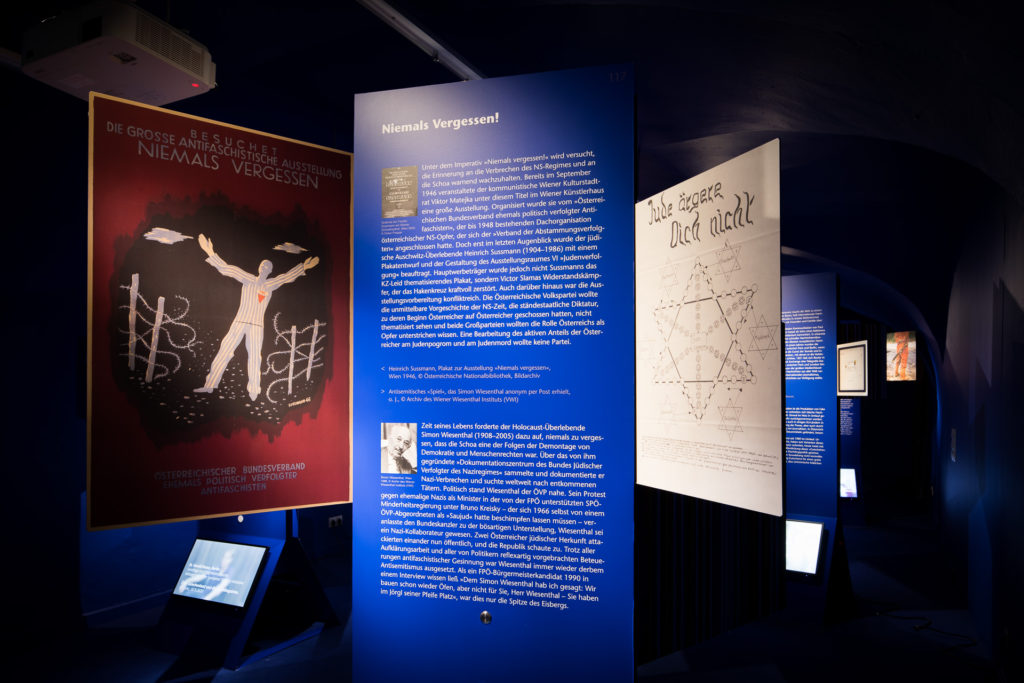 The imperative “Never Forget!” is a warning that endeavors to keep the memory of the National Socialist regime’s crimes and the Shoah alive. Indeed, as early as in 1946, Communist Vienna city councilor for cultural affairs Viktor Matejka mounted a large exhibition with that title at the Vienna Künstlerhaus. It was organized by the “Austrian federal association of former politically persecuted anti-fascists,” the umbrella organization of Austrian victims of National Socialism that existed until 1948, which had been joined by the “Austrian federal association of individuals persecuted for reasons of origin.” Yet, it was only at the last moment that Heinrich Sussmann (1904–1986), a Jewish Auschwitz survivor, was commissioned with designing a poster and exhibition room VI, “Persecution of the Jews.” It was not, however, Sussmann’s poster, which addressed the suffering in the concentration camps, but rather Victor Slama’s resistance fighter forcefully destroying the swastika that became the main advertisement vehicle. Even beyond that, exhibition preparations proved to be conflict-ridden. The Austrian People’s Party was unwilling to see the events immediately preceding the National Socialist period addressed, that is, the authoritarian corporate state, which had started with Austrians shooting at Austrians; and both large parties wished to have the Austrian victim theory underscored. No party was interested in dealing with the active participation of Austrians in the pogrom and murder of the Jews.

Throughout his entire life, Holocaust survivor Simon Wiesenthal (1908–2005) implored to never forget that the Shoah had been a consequence of the dismantling of democracy and human rights. Through the “Documentation Center of the Association of Jews Persecuted by the Nazi Regime,” which he had founded, he collected and documented Nazi crimes and searched for escaped perpetrators around the world. Politically, Wiesenthal was close to the ÖVP (Austrian People’s Party). His protest against former Nazis being ministers in the FPÖ-supported (Freedom Party of Austria) minority government of the SPÖ (then: Socialist Party of Austria) under Bruno Kreisky—who in turn had found himself berated as “Saujud” (sow of a Jew) by an ÖVP member of parliament in 1966—prompted the Federal Chancelor to maliciously insinuate that Wiesenthal had been a Nazi collaborator. Now, two Austrians of Jewish descent were attacking each other in public, and the republic watched. Despite all the educational efforts and all the affirmations of their anti-fascist convictions automatically uttered by politicians, Wiesenthal was repeatedly exposed to rude anti-Semitism. When in 1990 an FPÖ mayoral candidate let it be known in an interview: “I’ve said to Simon Wiesenthal: We are already building ovens again, but nor for you, Mr. Wiesenthal —you have plenty of space in Jörgl’s pipe,” it only was the tip of the iceberg.