European Diary, 15.12.2020: 161 years ago today Ludwik Lejzer Zamenhof was born in Bialystok. In 1887, under the pseudonym Doctor Esperanto, he was to found a planned language that is still spoken and cultivated today by people who hope that the Babylonian confusion of languages will one day no longer stand in the way of a united humanity.
A hope that seems today more than ever in vain. 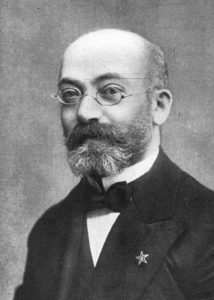 Zamenhof grew up in a multilingual world, a multilingual city where Polish, Russian, German and Yiddish were spoken as a matter of course. His father was associated with the Jewish Enlightenment movement, the Haskala, saw himself as a Russian and as an atheist. He worked as a language teacher of French and German – and became a Russian school inspector and censor. Zamenhof’s mother, on the other hand, was religious and spoke Yiddish. Lejzer, who soon adopted the non-Jewish first name Ludwik, drew his own lessons from this cosmos full of contradictions that were not mutually exclusive at the time. First, however, he studied medicine, first in Moscow, then in Warsaw, and became an ophthalmologist.
The pogroms of 1882 led the young Russian, as whom he too initially saw himself, to the early Zionist movement. But the goal of a Jewish homeland in the Middle East seemed unrealistic to him. He saw the future of the Jews in a reconciled world, without linguistic, cultural or religious walls. And consequently became an internationalist.
Even as a child, Zamenhof was enthusiastic about the richness of languages, mastering Russian and Yiddish as a matter of course, learning Polish, German and French at an early age, and Greek, Latin and English at school. He also learned Hebrew, as he was later to translate the Hebrew Bible into Esperanto.
His real dream, however, was an easy-to-learn world language in which a divided humanity could find its way to each other. Not to forget their “own” languages, but to gain a common basis. Already on his 18th birthday he sang a song with his friends in the Lingwe Uniwersale.
Finally, in 1887, he published his final draft under the name of Dr. Esperanto, and began publishing his own magazine, La Esperantisto, address books and dictionaries. And he worked on a universalist-humanist worldview, which he first called Hillelism (after the eminent Jewish scholar of pre-Christian times) and finally, in Esperanto, Homaranismo.
The Esperanto movement soon counted thousands of followers in various European countries. Many families taught the language to their children, including George Soros’ family in Hungary. But the nationalistic self-destruction of Europe during World War I could not stop his movement any more than the peace movement.
Zamenhof experienced the beginning of the war in 1914 in Cologne, on his way from Warsaw to Paris for the 10th Esperanto World Congress. During the war years, Zamenhof withdrew, worked on his translation of the Hebrew Bible into Esperanto, wrote a memoir To the Diplomats, which he called upon not to forget the minorities in the coming peace negotiations, and struggled with his heart disease, which finally defeated him on April 14, 1917. Zamenhof lived to the age of 57. On his last journey to the Jewish Cemetery in Warsaw, a large crowd accompanied him, including many of his poor Jewish patients.

To this day, there are Esperanto groups in many countries that at least uphold the memory of Zamenhof’s dream. In 2017, even Unesco had included Zamenhof’s 100th death anniversary in the list of official commemorative days of the year. The city council of Bialystok, dominated by the right-wing nationalist party PIS, however, refused to honor the famous “son of the city” with a Zamenhof Year. They really did not want to adorn themselves with a Jewish internationalist.