European diary, 4.4.2021: The history of many a multinational enterprise begins with pioneers on unknown terrain. And many a detour in a biography: Marcus Samuel was born 222 years ago today.

Since ancient times, the sea has exerted a specific attraction on man. It is dangerous and tempting, it separates and connects, it has murderous power and it gives food. Special and peculiar treasures of the seas have always exerted their own fascination on man. Spectacular sea finds were objects of princely desires, who could live out their fantasies of power with their possessions in their cabinets of curiosities. In the modern age, exoticism as well as natural science are attracting ever broader interest. Inspired by literary fantasy travel, wanderlust and real vacation memories, shells in particular appeared as souvenirs in Central Europe during the “Adria Exhibition”, the most important maritime show in Vienna. The “Adria Exhibition” of 1913 was the last major exhibition in Austria before the outbreak of World War I and the last major exhibition of the Austro-Hungarian Empire. [1] Souvenir shells had already been big sellers at the legendary “Venice in Vienna” show in 1885, where “ornamental and gallantry objects made of lava, coral, shells and tortoiseshell” had been offered.[2] But some time earlier, a businessman had already cleverly exploited the magic of vastness, depth and distance that shells exude: Marcus Samuel (April 4, 1799 – November 24, 1872).

As early as 1833, Marcus Samuel opened an antique store in London – some called it a colonial goods store, others say it was more of a curio store. In favor of the latter assessment is the fact that Samuel did not belong to the Sephardic elite of London, but rather came from modest Bavarian-Dutch migrant backgrounds. Another curiosity-shop variant is that one of his early best-sellers was a souvenir object, namely “knickknack boxes” with glued-on shells, which he sold on the beach in Brighton. However, in his store Marcus Samuel also offered the public interested in natural history and marine biology sea shells that sailors brought him from their voyages. The business flourished to such an extent that Marcus Samuel was able to persuade his sons to travel ever further distances by ship themselves in order to find – from an English perspective – ever more unusual shells. As the supply and demand grew, so did Samuel’s small fleet. Each of the ships was given a logo of sorts, each of which was a different shell.

Marcus Samuel Jr. eventually discovered that there was something else in the sea besides shells that could be exploited: Mineral resources. His brother Samuel Samuel also realized the importance of the oil trade during a trip to the Black Sea. And so the brothers switched from shellfish to kerosene and oil. Business skyrocketed and the Samuels formed a company, which was registered in 1897 under the obvious name of “Shell”. Of the various shells, they chose the crested shell or pecten as the final company logo in 1904. In 1907, the company merged with the Royal Dutch Company of the Netherlands and the Shell Group in its present form was born.[3] 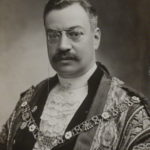 In 1902, Marcus Samuel Jr. was raised to the peerage of Baronet and became the second Jewish Lord Mayor of London. In recognition of his services in supplying fuel to the British Empire during World War I, he was finally honored with the newly created title of Viscount Bearsted in 1925.

His son Colonel Walter Horace Samuel, 2nd Viscount Bearsted MC (March 13, 1882 – November 8, 1948) was chairman of the Shell Transport and Trading Company. In addition, he was a dedicated art connoisseur and collector. His works of art included works by Rembrandt, Canaletto, George Stubbs, Hans Holbein the Younger and Hogarth. He was also a trustee of the National Gallery as well as the Tate Gallery and chairman of the Whitechapel Art Gallery in London.

His house and collection were donated to the National Trust in 1948, making them public. He served in World War I, but made his mark especially in World War II, working with the Secret Intelligence Service (SIS aka MI6) and then Special Operations Executive (SOE). As an officer in Section D of the SIS, he was initially involved in early attempts to establish resistance networks in Scandinavia from 1939 and was then a key figure in plans to establish a British resistance organization – the Home Defence Scheme. In the summer of 1940, he oversaw the transfer of some of the SIS intelligence to the new auxiliary units. Walter Samuel was a member of the anti-Zionist Jewish Fellowship, founded in 1942. Nevertheless, in the 1930s he advocated the emigration of Jews from Nazi Germany to Palestine while maintaining a peace there.[4]