European Diary, 2.3.2021: Gerald Reitlinger was born 121 years ago today. The youngest son of Albert Reitlinger and Emma Brunner – who came from the Hohenems family of the same name – he studied cultural studies at Oxford and art at two academies in London. From 1930 to 1931 he took part in excavations in Iraq, subsequently made several research trips to Iran, Turkey and China, and wrote books about his excursions – in 1932 A Tower of Skulls. A Journey Through Persia and Turkish Armenia. In addition, Reitlinger was an avid collector of both Syrian and Persian ceramics.
During World War II, he served in the British Army in air defense and as an instructor. 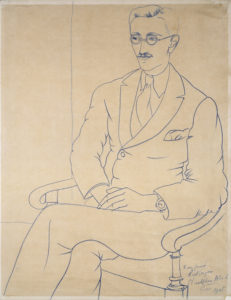 But after 1945 he devoted his life to researching the Holocaust. In 1953, he published his book The Final Solution in London, the first comprehensive account of the Shoah. Affected and skeptical, he questioned the national loss of memory that soon swept the former perpetrator countries. The Munich Institute of Contemporary History refused to publish Reitlinger’s book. It did not want to be disturbed by the “outside” in the process of coming to terms with National Socialism. Nevertheless, the book was published in German under the title Endlösung, as was Reitlinger’s 1956 study The SS. Alibi of a Nation 1922-1945, which was given a less sarcastic title by the publisher in order to make it more palatable to the German audience: The SS – Tragedy of a German Era. A third book on Nazi crimes followed: The House Built on Sand. The Conflicts of German Policy in Russia 1939-1945 was published in London in 1960, and under the title Ein Haus auf Sand gebaut. Hitler’s Violent Policy in Russia 1941-1944 in German.
Reitlinger then returned to art and cultural history. His three-volume work The Economics of Taste (1961-1970) is devoted to the history of the art market from 1760 to the present.
He bequeathed his collection, which was damaged by fire shortly before his death in 1978, to the Ashmolean Museum in Oxford, where it now forms the Gerald Reitlinger Gallery.

Here some paragraphs from “Final Solution”:
“The inquest is over, but it is not the business of the coroner to find the culprits or to judge them. Nevertheless, the reader, who has had the patience to follow even a fraction of this somber narrative, will have asked himself a dozen questions, and some of these must be discussed even if they cannot be answered.

How much did the man in the street in Germany know and how much did he care? How was it possible that so many hundreds or even thousands of hard-working bureaucrats of all grades went daily to their offices to compose, copy, or pass on the obvious correspondence of race-murder? Why, seeing that every ministry was fighting with every other ministry and that Hitler never knew in the least what was happening, any more than Tolstoi’s generals at the battle of Borodino, did not one of the righteous men, who said their piece at Nuremberg, make a single active Protest? (…)
Is the discarding of selected victims endemic in the overgrown modern ‘democratic’ State? Can it happen again and can it happen here? It may be very long before we know the answers to these questions, which recur throughout this inquest on the Final Solution in the form of a sort of repeat design or chintz.

It is difficult to believe that there existed any fully conscious beings in Germany or German-occupied Europe in the last two years of the war who did not know that most of the Jews had disappeared and who had not heard some story that they had been shot or gassed. Nor do I suppose that there was anybody who did not have a friend who knew somebody else who had seen a massacre. More than a hundred million people must have known such things and whispered about them, and yet they could not make the climate unpleasant for the few thousands who carried them out. (…)

And the higher the Germans rose, the more frightened they became till we reach the case of Heinrich Himmler, who was made head of the Police State almost by chance and whom Hitler retained just because he was a frightened man who could be informed on and intimidated. (…)

But before the July 1944 plot to murder Hitler, not even the obscurest of wartime officials was ever taken away and shot. (…) Were these the me to stand up for the rights of humanity? They were, it is probable, mostly no more cruel and callous than the Germans or, indeed, the human race as a whole. (…)

The German of 1933 was a sort of caricature of European civilization which had grown more frivolous, greedier, and less critical, as material progress undermined some of the older disciplines. (…)

Hiob on his dunghill wished ‘that mine adversary had written a book’ and his prayer has been answered, for indeed there is nothing that this adversary did not commit on paper. I have spent close to four years among these documents and I have found their company neither gloomy nor depressing. For on many pages darts and gleams that thing which prevents all government becoming a living hell – human fallibility. (…) It is possible that murderous racialism is something ineradicable in the nature of ants and men, but the Robot State which will give it full effect cannot exist and never will.”