European Diary, 5.10.2020: 133 years ago today René Samuel Cassin was born in Bayonne, one of the most committed advocates of human rights in the 20th century. In 1968 he was awarded the Nobel Peace Prize for his achievements. 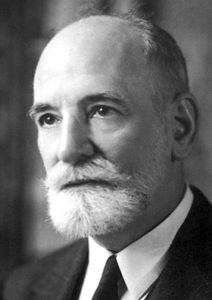 Cassin’s father Azarie Henri Cassin came from a Sephardic, Portuguese-Marran family and worked as a wine merchant in Nice. His mother Gabrielle Dreyfus came from an Alsatian-Jewish family. Cassin was drafted to serve in World War I as a doctor of law and returned seriously wounded in October 1914. Still during the war, he founded the Union fédérale, the French association of war victims, together with other war participants, which he was to preside over from 1922. In 1921 and 1924 he organized conferences of war-disabled and veterans who advocated understanding and peace agreements between the enemy nations. He did so as a French patriot who was convinced of a French universal mission:

“For centuries we have embodied an ideal of freedom, independence and humanity”, and therefore for him the members of the Union fédérale were the “representatives of French morality in the world”.

As professor from 1920 in Lille, then from 1929 at the Sorbonne in Paris, he taught international law. Above all, however, Cassin was active in countless non-governmental organizations and political offices.  From 1924 to 1938 he represented France at the League of Nations. In 1940 he emigrated to London and, together with Charles de Gaulle, founded France Libre, the French exile army in the British armed forces. From 1941 to 1943 he became National Commissioner of the Free French Government in London and in 1944 he was one of the initiators of the French Committee for National Liberation in Algiers and as president of its legal commission prepared French legislation after 1945. In 1944 he became vice-president of the French Council of State (until 1960) and in 1946 also president of the French elite academy École nationale d’Administration.

Finally, from 1959 to 1968 he was vice president, then president of the European Court of Human Rights.

A trip to Palestine in the 1930s, perhaps also his Sephardic family heritage, had motivated him to work for the advancement of the Arab-Jewish population of Palestine. After 1945, in addition to his many other offices, he became president of the Alliance Israelite Universelle (which in the 19th century represented the ideals of the French Revolution and was intended to spread European education among Oriental Jews, not without a certain amount of European-colonial arrogance).

“Hitler’s main goal was the extermination of the Jews,” wrote Cassin, “but their annihilation was also part of an attack on everything the French Revolution stood for: freedom, equality, brotherhood and human rights. Hitler’s racism was essentially an attempt to erase the principles of the French Revolution.”
Cassin supported the Jewish national Zionist project after the annihilation of European Jewry. After 1945, however, Cassin demanded clear limitations on national sovereignty in all matters of human rights, which must take precedence over any national legislation and must also be enforced by means of coercive measures. His advocacy of social rights also aroused distrust of him in the United States. An official of the State Department did not hesitate to call him a “crypto-communist”. But apart from his commitment to human rights and the ideals of equality, Cassin remained a classically conservative liberal in many sociopolitical issues. For example, he had a rather hesitant attitude toward legal equality for women, and in the French parliament in exile in Algiers he even voted against the immediate introduction of active and passive suffrage for women.