European Diary, 17.4.2021: Today, 76 years ago, Hilda Monte was shot, close to the checkpoint Tisis, at the border between Feldkirch and Liechtenstein.

Hilda Monte was born Hilde Meisel in Vienna on July 31, 1914. In 1915, she and her family — her parents, Rosa and Ernst Meisel and her older sister Margot — moved to Berlin, where her father ran an import-export business. While still a teenager, she joined the International Socialist Fighting League (Internationaler Sozialistischer Kampfbund, or ISK in German), a group founded by German philosopher Leonard Nelson in 1926.

In 1929, Hilde traveled to England for the first time to visit her uncle, the composer Edmund Meisel. In 1932 she moved to Paris. She regularly published analyses of the political and economic situation in England, France and Germany, Spain and the colonies. She spent 1933 and 1934 in the German Reich before emigrating again to Paris in 1934 and to London in 1936. She continued to travel illegally to the German Reich several times after that, helping organize workers’ resistance actions. In 1938, in order to prevent her expulsion from England, she entered into a marriage of convenience with the German-British cartoonist John Olday, becoming a British citizen.

During the war, she remained involved in a wide variety of resistance activities, whether as a courier for the International Transport Workers’ Federation or on behalf of Allied intelligence services. In 1940, her book How to conquer Hitler, co-authored with Fritz Eberhard, was published. In the same year, she was involved in the creation of the radio station ” European Revolution” and worked regularly for the German workers’ broadcasts of the BBC. In 1942, she gave a shocking report on the radio about the mass extermination of Jews that had begun in occupied Poland. And she wrote Poems and worked on her novel Where Freedom Perished, that was published only in 1947.

In 1943, her book The Unity of Europe was published in London, in which she developed the vision of a socialist Europe and its common institutions as an independent union between the USA and the Soviet Union. In 1944, together with her friend and ISK comrade Anna Beyer, she was parachuted over occupied France to make resistance contacts on behalf of the American intelligence service OSS and Austrian socialists. Soon after, she was taken to Switzerland by René and Hanna Bertholet, were they discussed political theories with socialist émigrés for the period after liberation. When she had time for it, Hilda Monte contemplated the idea to go to China to engage in the development of socialist cooperatives – and produced little sculptures from clay.

In April 1945, Hilda Monte again crossed the border illegally to establish contact with socialists in Vorarlberg and to gather information about resistance groups there and their relationship to each other. A questionnaire she had prepared for this purpose is now in the archives of the Friedrich Ebert Foundation in Bonn.

On her way back, she was stopped by the border guard in Feldkirch on April 17, 1945, a few days before the end of the war. She tried to escape but was shot and died of her injury on the spot. Austrian socialists placed a tombstone on her grave with the inscription: “Here rests our unforgettable comrade Hilde Monte-Olday. Born 31.7. 1914 in Vienna. Died 17.4.1945 in Feldkirch. She lived and died in the service of the socialist idea.”

After the war, many of her comrades became prominent members of the Social Democratic Party in Germany, pioneers of the emerging European Union and founders of intellectual periodicals, educational institutions and publishing houses, such as the Europäische Verlagsanstalt.

Hilda Monte, born at the beginning of World War I and shot to death a few days before the second one ended, did not live to that.

Today, representatives of the Protestant congregation of Feldkirch, the Jewish Museum Hohenems and the Social Democratic Party of Austria inaugurated a memorial plaque next to her recently restored grave. 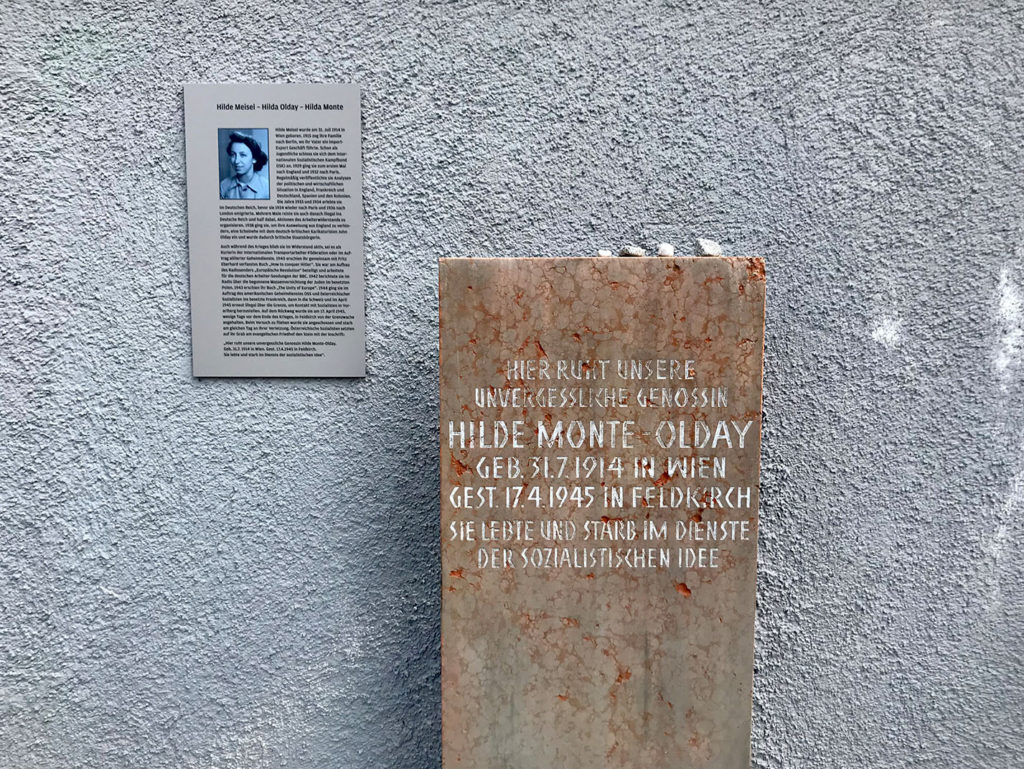