Flashback, 6.5.2020: The far-right AfD (“Alternative for Germany”) in Germany now advertises with the portrait of Yair Netanyahu, the son of the Israeli prime minister who repeatedly stands up for his father.
Yair Netanyahu had tweeted on April 28: “Schengen zone is dead and soon your evil globalist organization will be too, and Europe will return to be free, democratic and Christian!” And further: “The EU is the enemy of Israel and all Christian countries in Europe.” What was meant was the support of the EU representation for the large annual peace event of the Combattants for Peace, which commemorates the victims on both sides on the eve of Israel’s Heroes’ Day. 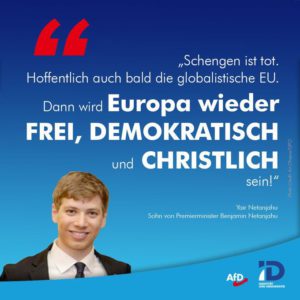 The new Posterboy of the AfD: Yair Netanjahu

Netanyahu promptly received applause from AfD Member of the European Parliament Joachim Kuhs on his Facebook page. Which Yair Netanyahu answered with an enthusiastic call to Kuhs and the AfD to finally end this “madness” with his “colleagues.” What was meant was EU support for NGOs in Israel and Palestine.
Kuhs, chairman of the “Christians in the AfD” and member of the AfD federal board, has only recently visited Israel together with representatives of the “Jews in the AfD” to meet representatives of Likud – and writes again and again in right-wing and radical right-wing German and Israeli media about the “hostility of the EU towards Israel”, apparently one of his favorite topics.
The AfD, whose members are repeatedly seen with Israeli flags at right-wing demonstrations, also make no secret of the kind of Israel they love: namely the one that finally ensures that the Jews no longer want to be part of Europe – and in this way they can finally be gotten rid of.