European Diary, 20.10.2020: Hardly anyone has crossed so many borders as he has, and this under many different names. 115 years ago today he was born in Baku or in Kiev: Lev Abramovich Nussimbaum alias Essad Bey alias Kurban Said alias Mohammed Essad-Bey. His father was a Georgian Jewish oil industrialist, his mother a Russian Jewish revolutionary in addition to my own. A German nanny took care of young Lev, who attended high school in Baku, until the family fled the Bolsheviks across the Caspian Sea in 1918.

His odyssey led the 15-year-old Lew to the German colony of Helenendorf in Georgia in 1920, and from there via Tbilisi, Istanbul, Paris, and Rome to Berlin. In 1922 Nussimbaum converted to Islam there, renamed himself Essad Bey and began to be active in the Berlin Islamic community. He studied Turkish, Arabic and Islamic history and became acquainted with the literary scene in Berlin, with Else Lasker-Schüler, Vladimir Nabokov and Boris Pasternak. As a journalist he wrote about the “Orient” and Islam for German newspapers, and in 1929 he made his debut as a literary author with an autobiographical novel, Oil and Blood. 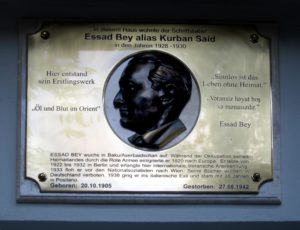 This was followed in 1932 by a biography of Mohammed that is still considered a reference work today. His anti-Communist writings, on the other hand, and the fact that his Jewish origins were not an issue in Berlin at first, also gave him access to the Reichsschrifttumskammer in 1934. But in 1936, Essad Bey, who was now living in Vienna, was banned from publishing in Nazi Germany. He published his next novel, Ali and Nino, under his new pseudonym, Kurban Said. And the book became a great success in Germany as well. (New editions followed till 2000 and 2002). In 1938, Essad Bey, who by then had come to admire Italian fascism, traveled via Switzerland to Italy, presumably to write a biography of Mussolini. Under growing physical pain he reached Positano in southern Italy, where he was diagnosed with Raynaud’s disease. His German nanny from Baku cared for him during the last months of his life, in which he completed his last, so far unpublished novel, The Man Who Understood Nothing about Love. In 1942 Lew Nussimbaum alias Essad Bey alias Kurban Said died in Positano.

The American journalist Tom Reiss wrote Nussimbaums weird biography: The Orientalist. Solving the Mystery of a Strange and Dangerous Life. 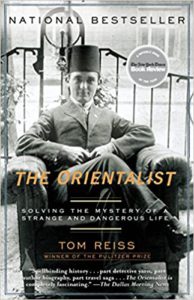 Lew Nussimbaum’s biography may be one of the most extreme examples of the borderline crossings that led many Jews to a keen interest in Islam and its history as early as the 19th century – starting with the representatives of the “scholarship of Judaism”, such as Abraham Geiger, who was to be one of the founders of modern Oriental and Islamic Studies.